This is a very good article by the folks at Behavior Gap that apply to finance or your life… I thought it was worth passing along….

Since we’re halfway through January, I thought it might be the perfect time to talk about New Year’s resolutions. If you set them, how are you doing? Still sticking with it or has your enthusiasm dropped off a bit? I ask, because I think we may be overlooking something that makes resolutions very difficult to keep.

Josh Brown described it perfectly at the end of 2013 when he outlined why he sets goals instead of making resolutions:
“I don’t make New Years Resolutions because they imply that I’m somehow doing something wrong or poorly. I am, of course, doing things wrong like everyone else – but with a Jewish wife and an Irish Catholic mother, I’m not exactly lacking for guilt and criticism in my life as it is. I’m certainly not looking to heap more on myself every January.

But while I don’t start off the year vowing against certain behaviors, I do set goals for myself. I’ll save you the trouble of the working out this particular dialectic – goals and resolutions are indeed the same thing, just phrased differently. But one carries a positive connotation and has, embedded within itself, the seed of promise. That’s how I prefer to think about the near future and what I can possibly do to shape it.”

Josh’s logic touches on something that I think trips up many investors. Like New Year’s resolutions, we frame our past financial behavior as doing something wrong. Because it’s a negative, it can be difficult to wrap our heads around making a change. Who likes admitting that they made a mistake?

But something happens when we talk in terms of setting goals. It becomes more about the possibility of something good happening as opposed to the negative of a past mistake. I get that this seems like a very small distinction, but it’s an important one.

When we talk about behaving and making better financial decisions, attitude matters. To Josh’s point, how much criticism do we need before it becomes counterproductive? It’s one thing to acknowledge and learn from a mistake, it’s another thing to make it our focus going forward.

By setting goals that imply something good, we’re changing the tone from one of blame to one of possibility. Did you resolve to never sell low again after 2008? What if instead you set a goal to build a low-cost, diversified portfolio? The goal deals with the mistake and gives you a positive way forward while the resolution implies you did something stupid. 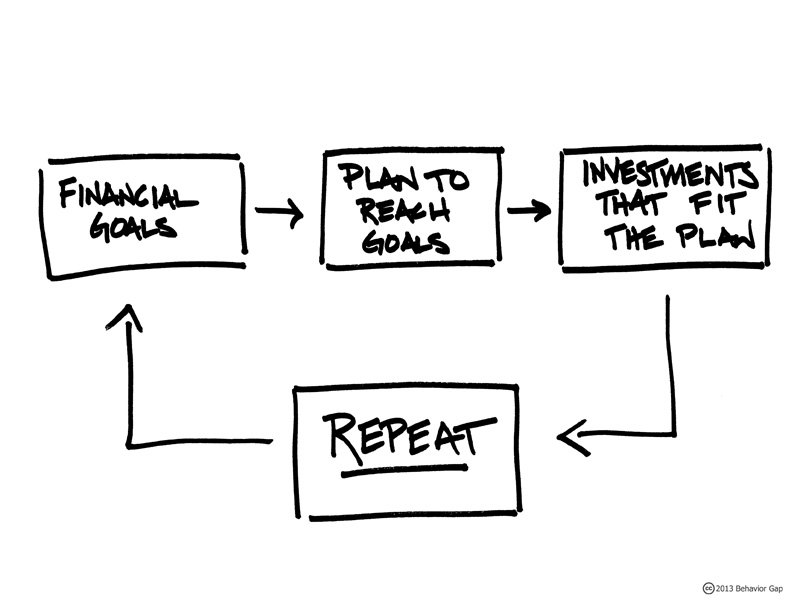 Again, I get that this seems like a small thing, but humans are inclined to latch on to small things to justify almost anything anyway. So why not latch on to the small thing of setting a goal instead of making a resolution? If you’re struggling with your resolutions, it’s not too late to make the switch. Set a goal or two for 2014 and see what happens. I’d love to hear the results. Does it make a difference that you’re working towards a goal instead of trying to stick to a resolution?